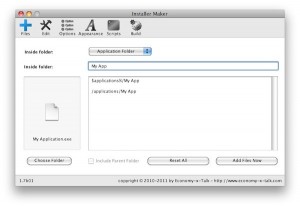 Note that 1.7.4Sb01 is a beta version. It may work or fail completely. Economy-x-Talk doesn’t bear any responsibility for any problems caused by Installer Maker. See also our business terms and the license included with the software.

There are 4 different versions (for Mac OS X PPC, Mac OS X Intel, Mac OS X Universal and for Windows), which you can download here. Do you like Installer Maker? You can buy a license with a 25% discount until Friday 9 March! Go to http://qery.us/1v7 to get your discount! The discount applies to both the standalone and the plugin version of Installer Maker.